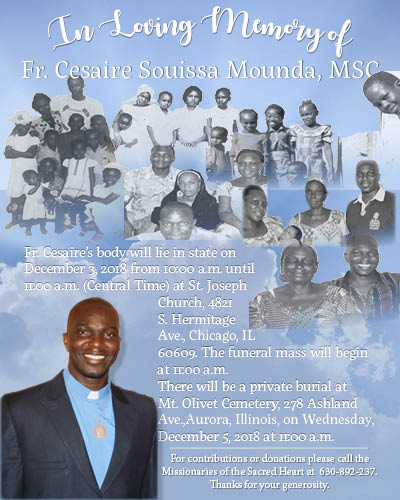 Fr. Césaire Souissa Mounda, MSC, was born on Oct. 24, 1980, in Figuil North Cameroon, Africa. His father, Munda Dieudonné was a Police Commissioner. He died on Oct. 22, 2001. His mother is Asta Antoinette.

Fr. Césaire was the third of seven children. He completed primary school and then entered the high school seminary at Guider. After his graduation he taught at a primary school for two years. During this time he met Fr. Filip Maenhout, a Missionary of the Sacred Heart priest, who encouraged him in his desire to study to become a Catholic priest with the Missionaries of the Sacred Heart Religious Congregation.

On 2017, Fr. Césaire received a BA in Communication Studies from Loyola University where he was working towards a master’s degree in Digital Media and Storytelling.  During the last three months he struggled with liver cancer until his death on November 25, 2018.