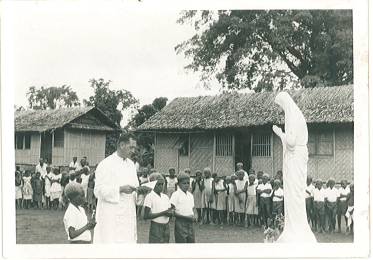 This happened at Lemakot Mission in New Ireland in my early years there as pastor. It was the week before Christmas and we started preparing to set up the Christmas crib. The statues for it were stored in boxes in a side sacristy that had no locks on it, but I didn’t expect any problems. We started opening boxes and to our great dismay we found the back of the head of baby Jesus broken off of the plaster statue. The statue appeared to be neatly wrapped just as it had been stored, and I had previously caught some girls hanging around there, so I suspected that the probable cause of the breakage was that some little girl students had discovered the statues and had been playing with the baby Jesus as if he were a doll. Most little girls there don’t have dolls or at best may have a rag doll sewed up by their mother. Imagine how wonderful it must have seemed to them to be able to play with the baby Jesus. But unfortunately one of them seemed to have dropped him causing the back of the head to be completely smashed while the face remained whole. I had no glue that could repair such damage.

I took the statue to where my workers were to see if any of them had any ideas. One of them suggested asking a certain man in the next village who repaired many things with “esky”. Now esky was the name of a popular portable ice chest and by extension the people applied the name to anything made of Styrofoam plastic. I sent one of my drivers to see if he could find the man and bring him back. Luckily he turned up, and explained that he would soften the Styrofoam with gasoline and then use different tools to shape it. I showed him the statue and he assured me he could repair it. I sent him off with the statue, a bottle of gasoline, and some pieces of Styrofoam. Then began a long wait.

Finally on Christmas Eve he returned with the statue completely repaired with the whole back of the head replaced. It was a little smaller than before, but that could be covered up with a little extra straw. He had not only repaired it but painted it again, repainting the whole head to match the repair. He was certainly a good artist. So we had a very happy and holy Christmas, and I think there were some guilty little girls in the church who were very relieved to see Jesus back together again.