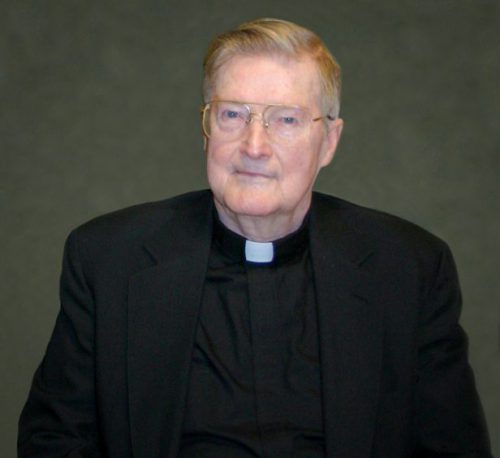 Father John J. Paul, MSC died on June 2, 2020, at around midnight. He was 87 years old. He was born in Laureldale, Pennsylvania on October 8, 1932, to Walter A. Paul Sr. and Edith M. (Wenrich) Paul. He graduated from Holy Guardian Angels Parochial school, Reading, PA in 1946. In that same year, he entered the Sacred Heart Mission Seminary in Geneva, Illinois, where he completed four years of secondary education and one year of college studies. In 1951, he entered the novitiate of the Missionaries of the Sacred Heart, in Shelby, Ohio, and concluded his novitiate in Youngstown, Ohio. He made his first profession of vows on September 14, 1952. He continued with studies for the priesthood at Sacred Heart Seminary in Shelby for three years, making perpetual profession of vows on September 14, 1955. He then traveled to Rome, Italy, where he studied at the Gregorian University until 1959, receiving the degree of Licentiate in Sacred Theology.

Fr. Paul was ordained to the priesthood by Bishop Joseph Gawlina, D.D, in Rome, Italy on July 13, 1958. He then returned to the USA and continued studies at the Catholic University, and in 1962 he was awarded the degree of Doctor of Canon Law. His first assignment thereafter was as a teacher at Sacred Heart Seminary, Shelby, Ohio. In 1964, he became director of the theologate program, first at Shelby and later at Catholic Theological Union in Chicago, Illinois. From 1973 until 1985, Fr. Paul was a member of the provincial council. In 1982, he became superior of the MSC community in Youngstown, Ohio, a position he held until January 1992. Beginning in 1971, he served as a judge in various diocesan tribunals, including those of Chicago and Youngstown. He served as a judge on the Provincial Tribunal and was the chairman of the Ministry to Members Board from 1985 until 1991. In January of 1992, he was appointed parochial vicar at Holy Family Parish in Nazareth, PA., and as a part-time pro-synodal judge for the tribunal of the Allentown, PA diocese. In August 1996, Fr. Paul was appointed to the Reading, PA community as superior. He then served full time on the Allentown diocese marriage tribunal. On July 1, 2001, the Reading and Center Valley, PA communities became the Pennsylvania community, and Fr. Paul was appointed superior.

On December 19, 2002, Bishop Edward Cullen appointed him as Judicial Vicar for the Allentown Diocese Tribunal. In 2007, Fr. Paul moved to Sacred Heart Villa in Center Valley, PA, where he lived for the rest of his life, except for the last few weeks. He continued to work in the Allentown diocese tribunal, doing so from the Villa when he could no longer drive.

Fr. Paul is survived by a sister, Edith, widow of David Moorman, Reading, PA. He was predeceased by brothers Walter A. Paul Jr., Frederic F. Paul, Fr. Gerald (Chet) Paul MSC; sisters Nancy Quire and Monica Miller. Other survivors are sister-in-law Bernice A. (Rohrbach) Paul, brother-in-law Gerald C. Miller Sr., Reading, PA, 16 nieces and nephews, and over 30 great nieces and nephews. In accordance with the virus guidelines a Mass of Christian Burial for Fr. Paul will be celebrated on Tuesday, June 9, 2020, at 10:00 AM at the Sacred Heart Villa. Bishop Alfred Schlert of the Allentown Diocese will preside. Fr. Michael Camilli, MSC will preach.

Fr. Paul will be buried at Gethsemane Cemetery in Laureldale, PA. Memorial contributions in Fr. Paul’s memory may be made to the Missionaries of the Sacred Heart, PO Box 270/305 S Lake St, Aurora, IL 60507