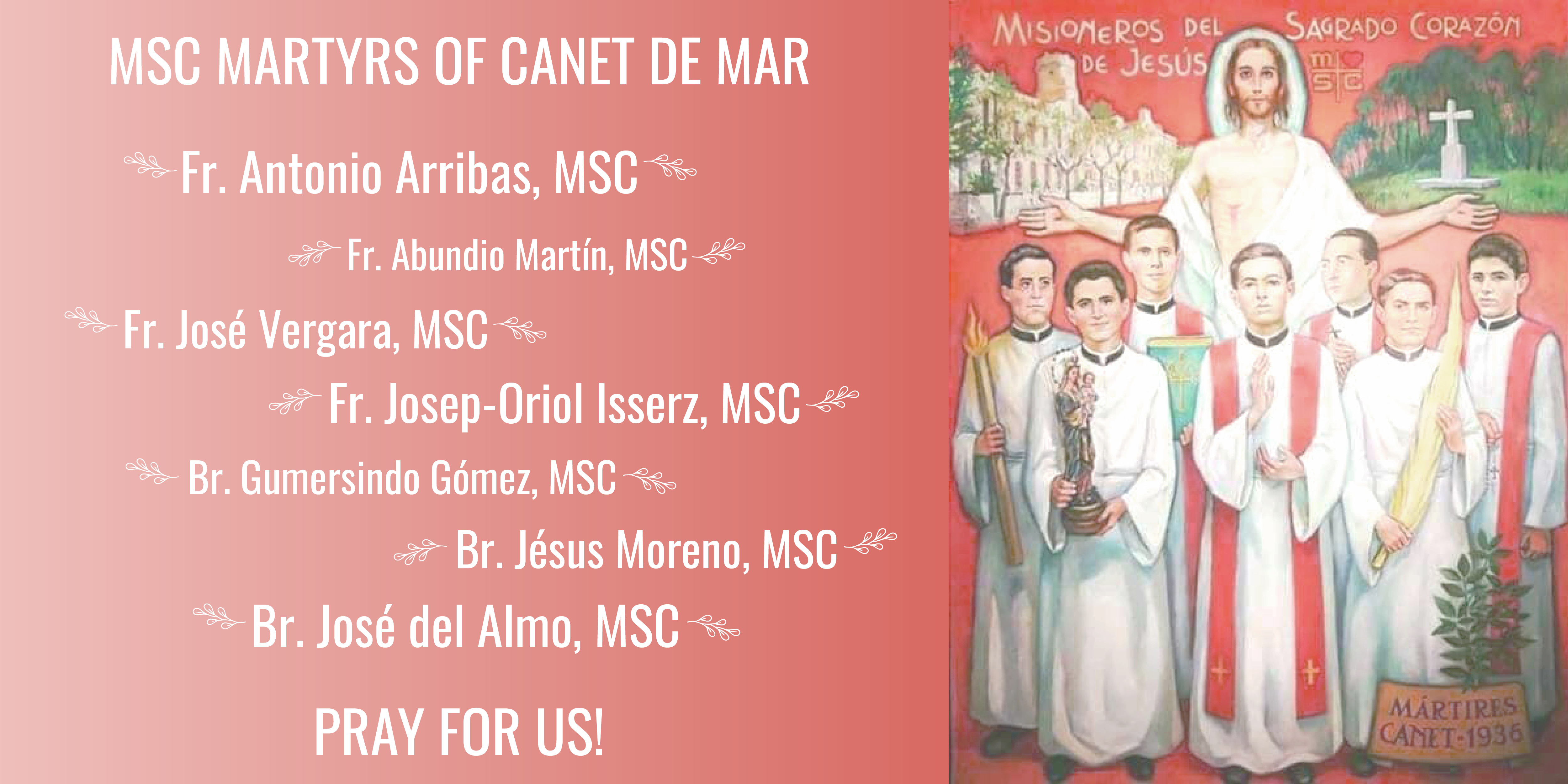 Today is the feast day of the seven MSC martyrs. Blessed Fathers Antonio Arribas, Abundio Martín, José Vergara, Josep-Oriol Issern and Brothers Gumersindo Gómez, Jésus Moreno and José del Almo were beatified in May 2017 and are the first members of our Congregation to be declared blessed.

These seven Missionaries of the Sacred Heart lived and worked in the Pequeña Obra (minor seminary) of Canet de Mar, Barcelona, preparing some 65 young people for religious life and priesthood. By their lives and by their deaths as martyrs, they give the fullest meaning to the motto of our Congregations: May the Sacred Heart of Jesus be loved everywhere!

Martyrs for the Faith

July 18, 1936 marked the beginning of the Spanish Civil War. The days that followed were ones of anguish and desolation and saw the beginning of a religious persecution. On July 21, the parish church of Canet de Mar was burned down. On that same day, at about 4:00 pm, a group of armed people knocked on the door of the house and demanded that the entire community of the seminary abandon the premises by order of the People’s Committee. They were led to a nearby park beside the Shrine of Mercy, where they were kept under surveillance for two weeks.

On August 3, a member of the Committee warned the director: “You people are in imminent danger. The Committee has decided to shoot you this very night. Leave and do not get me involved. Don’t worry about the children; nothing will happen to them. And we consider the elderly priests to be like the children.” Much to their regret, the religious had to leave the seminarians. They formed two groups for their escape: one group of four and another of seven.

Fleeing those who wanted to kill them that night, Fr. Antonio Hortigüela and his six companions began a difficult journey towards the French border. They passed through places they did not know, hiding all the time, barely able to sleep or eat, in adverse weather conditions. They did, however, receive help in several farms. What is truly remarkable is that they were able to stay together as a group all this time.

On September 28, they arrived at a farmhouse called Mont-Ros as night began to fall. One of the religious went to the house to ask for directions. They did not want to stay to eat; they only wanted information about the road to the border. They followed the instructions they had been given and after traveling a little more than a kilometer, a group of Committee members was waiting for them. They had been betrayed, and they were immediately apprehended and taken to Committee headquarters.

This is how, exhausted by the fatigue and the sufferings of almost two months of flight over mountains and down ravines, innocent and without guile, they came to follow in the footsteps of the Master. At about 10:00 pm, they were handed over to the Committee of Sant Joan les Fonts, Girona. They were taken to the schoolhouse where the Committee had its seat. A neighbor woman, from the terrace of her house, saw them pacing in the hall praying the rosary.

The next day, September 29, between 3:00 and 4:00 in the afternoon, a crowd assembled in the door of the schoolhouse. The religious were bound two by two. The one who walked alone had his hands tied behind his back. They were silent; almost all of them were peaceful. One of the youngest was crying. The crowd was impressed and kept silent. One of the Committee members attacked the Pope, the church and the clergy saying: “Not one of your race will remain!”

The prisoners were put on a bus. The bus came to a stop before crossing the bridge on the River Ter. Some witnesses who were working in a field nearby saw the bus stop and how four people, bound two by two, were taken out and pushed towards a slope. The witnesses heard arguing and then shots, and they saw how the four bodies leaned forward at the same time. The other three religious were then brought out of the bus and suffered the same death.

That same afternoon the Committee members forced some men from the town of Serinyà, known as good Christians, to carry the bodies to the town cemetery. The martyrs were buried in tombs dug in the ground, four bodies in one and three in the other. This was their resting place until March 30, 1940, when their bodies were exhumed and transferred to the cemetery of Canet de Mar, near the MSC community. Following the solemn celebration of beatification, their remains were placed in one of the chapels of the Shrine of Our Lady of the Sacred Heart, calle Rosellón 175, Barcelona.

The Calvary suffered by these seven religious and the circumstances surrounding their deaths make it possible for us to see in them an unquestionable witness to fidelity to their commitment as Christians and to the practice of the Evangelical Counsels which they had professed.