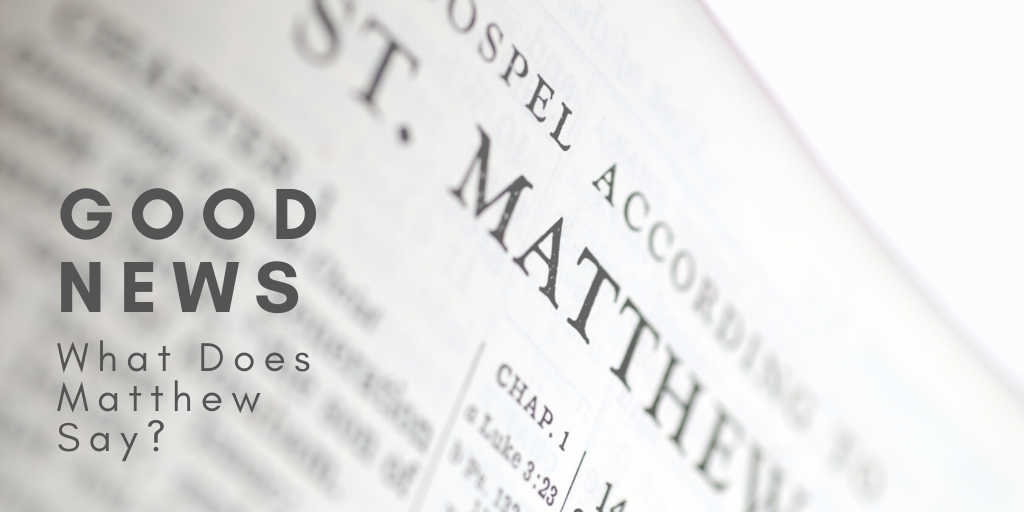 The reading taken from one of the gospels is an important part of the readings for the Sunday Mass. The word “gospel” means “good news,” because these writings teach us about our relationship with God through Jesus Christ. It really is good news because Christ has shown us that God loves us and saves us through his death and resurrection. There are four gospels, and this year we are reading from the Gospel according to Matthew.

Sometimes we wonder why there are four gospels instead of just one big account that contains everything that Christ said and did. But a gospel is neither a simple history nor a biography of Christ. A gospel is a proclamation of faith in Christ, seen through the witness of the first communities of the early Church. Each writer wants to form his community as disciples through the meaning of the words and events of Jesus fulfilling his mission here on earth. Each gospel shares a particular authentic experience of Jesus and intends to help us to understand better our experience of him.

Matthew wrote his gospel for a community made up principally of people who grew up in the tradition of the Jewish religion and who have joined themselves to Christ through faith and baptism. It places a lot of emphasis on the prophecies of the Old Testament and shows how they are fulfilled through Christ. This gospel presents Christ as the “new Moses,” proclaiming the values of the Kingdom of God (chapters 5-7). This part, known as the Sermon on the Mount, proclaims the values of the Kingdom as a challenge to the values of the world and declares happy/blessed those who commit themselves to living these new values and to transforming the world according to the image of Christ. It shows that the Kingdom of Heaven has already begun and is a reality. The Kingdom is in the process of becoming and looks toward the day when the leaven will have transformed the dough.

Matthew’s community already has an identity distinct from the Jewish community. In the first years after the death and resurrection of Christ, many of the disciples continued to attend the prayers in the synagogue and in the temple, while at the same time celebrating the Eucharist (”breaking bread”) with the other disciples. (See Acts 2:46.) But with the passing years, the difference between the Jews and the followers of Christ became more evident. After the destruction of Jerusalem and the temple in the year 70, the Pharisees excluded the Christians; and on the disciples’ side, they recognized that the center of their faith was Jesus Christ, the true Son of God and the savior promised through the prophets. In the Gospel according to Matthew we see the developing structure and identity of the Christian community. It applies the teaching about Christ to the formation and values of the community as Church, the New People of God. It recalls many of Christ’s parables which explain how it is with the Kingdom of Heaven (see, for example, chapter 13). Matthew also wants his community to know that the Kingdom is for all peoples (see the account of the Magi, chapter 2; chapter 28:19). The community is challenged to “Go and make disciples of all nations!”

In this liturgical year, reading each Sunday the texts of the gospel according to Matthew, we join with the disciples of that time to be formed, along with them, through the experience of the good news presented by Matthew. It is an opportunity to deepen our own identity as disciple and as community of faith.

Father Dave professed his first vows on September 13, 1960 and was ordained on March 11, 1967. He is working in Palm Springs, California as Pastor of Our Lady of Solitude and Our Lady of Guadalupe Parishes.