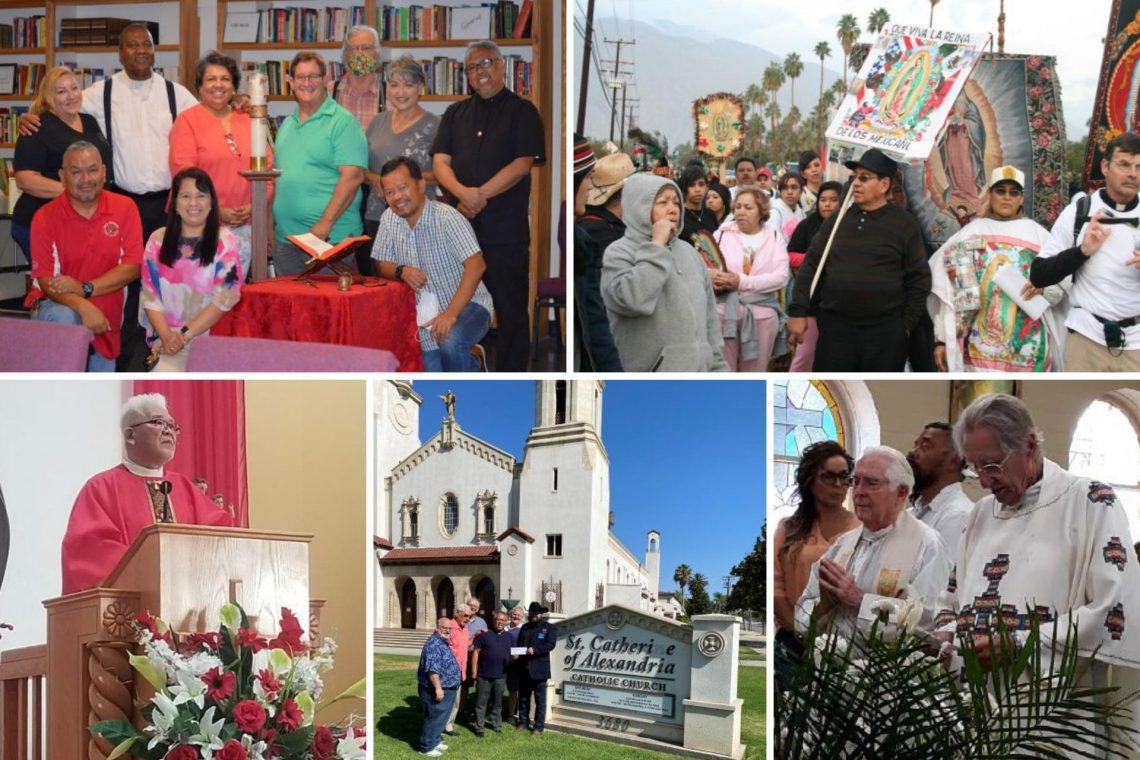 See below for updates and pictures from our Missionaries of the Sacred Heart in Southern California.

Donate to the MSC

There are three Catholic parishes in Palm Springs California where three MSC priests are now ministering. Fr. David Foxen and Fr. Franklyn Dass are at Our Lady of Guadalupe (the original Native American Parish) and Our Lady of Solitude (the “parish of the stars” when many movie stars and entertainers lived in Palm Springs). Fr. John Kavcak is at St. Theresa’s, the newest (74 years old) parish. 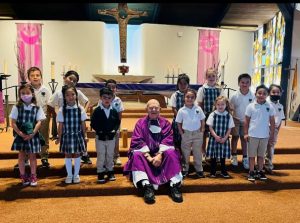 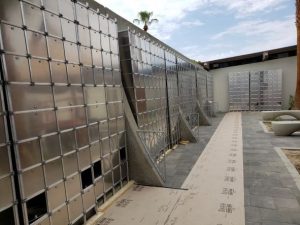 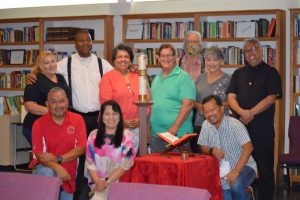 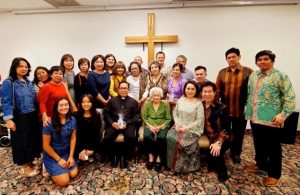 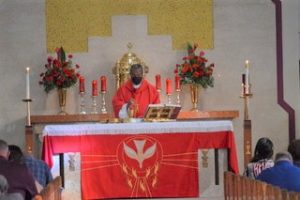 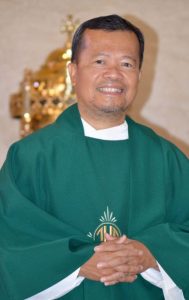 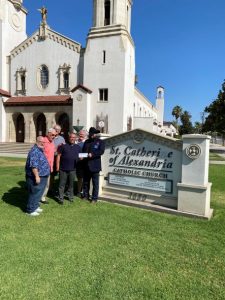 Fr. Jun with the Knights of Columbus 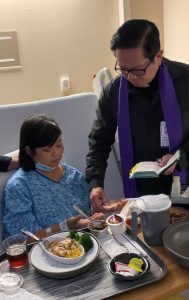 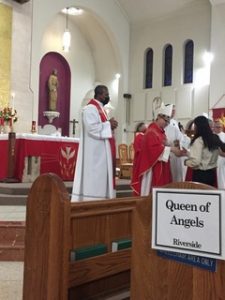 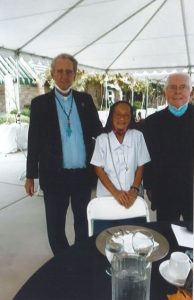 Fr. Earl Henley, MSC pastor of the Native American Ministry in the Diocese of San Bernardino, CA;
Sister Genara, MSM, Philippines, and Fr. Tom Burns, MSC. All are Staff for the Native of American Parish
of 6 reservations in Southern, CA. 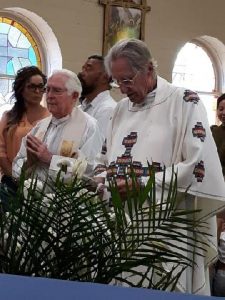 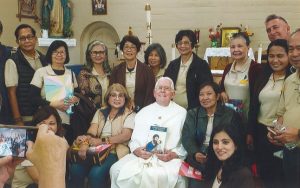 A group of our Phillipino parents who also support our Soboba School named after St. Jude. Our
patroness is St. Kateri Tekakwitha. (Picture at Soboba Village Church near St. Jude School)

The original Catholic presence in Palm Springs included the Native Americans, members of the Agua Caliente Band of the Cahuilla Indians. Soon after, the Mexicans came seeking refuge from the violence of the revolution in Mexico in the early 1900s. This community formed what today is the parish of Our Lady of Guadalupe. It is still today the official parish of the Native Americans but serves especially the English-speaking retirees and the tourist “Snow Birds” who come to escape the ice and snow in the winter months.

Our Lady of Solitude was formed as a parish in the late 1920’s. The church, built in a neo-colonial Spanish style, was dedicated in 1930, when Palm Springs was just beginning to grow as a place for people to come to enjoy the desert sunshine and the new hotels and resorts. Some of the Catholics among them built the church, and around mid-century it became known somewhat fancifully as the “church of the stars.” Plaques in the church recall stars like Bob and Dolores Hope and Liberace, who was our next-door neighbor. Today the parish is the spiritual home to a sizeable Hispanic community, including people from Mexico and both Central and South America. The English-speaking community counts a number of retirees and the annual Snowbirds. But several Filipino and other Asian families call this their spiritual home as well. Each part of the community brings its own traditions which add to the richness of our parish family.

The celebration of the Eucharist is the center and heart of both parishes along with the other sacraments that give life to a parish community. Now that the pandemic seems to be easing up, many of our parish activities are returning with new life. These include our religious education programs covering everything from First Communions, Confirmation, and the Rite of Christian Initiation for both adults and children. “Well in the Desert” comes here once a week to provide an outreach to those who have no permanent home. “Gifted and Called”, which is a ministry of the Catholic LGBTQ Community, has members from all the parishes in Palm Springs. During this time of preparing for the Synod of Bishops in Rome in 2023, we have been active with listening sessions promoted by the diocese.

Each year on December 12 we are the starting point for a thirty- two mile pilgrimage from Palm Springs to Coachella in the eastern part of the valley. Thousands participate each year in the pilgrimage which begins with Mass here at 4:00 am followed by mañanitas, a special sung morning prayer, before the walk begins. We believe this is perhaps the longest pilgrimage in the United States in honor of the Virgin of Guadalupe.

The Missionaries of the Sacred Heart have provided pastoral care and leadership at Our Lady of Solitude and Our Lady of Guadalupe since 2005. We try to bring the Spirituality of the Heart as the foundation of our ministry. 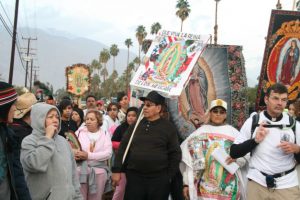 Fr. David Foxen, MSC, Pastor, participating in the Pilgrimage for Feast of Our Lady of
Guadalupe 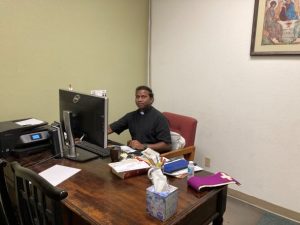 Fr. Franklin Dass, MSC, Parochial Vicar at
Our Lady of Solitude and Our Lady
of Guadalupe, preparing class 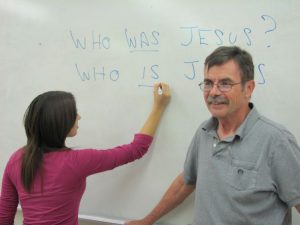 Fr. David Foxen, Pastor of Our Lady of
Solitude and Our Lady of Guadalupe 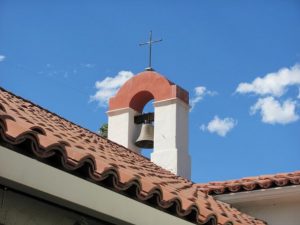 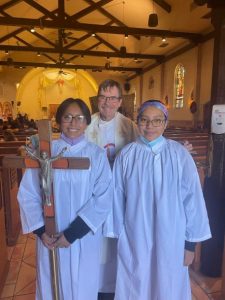 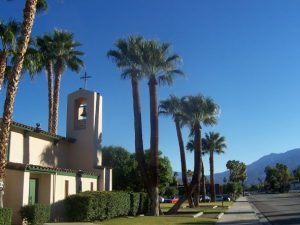 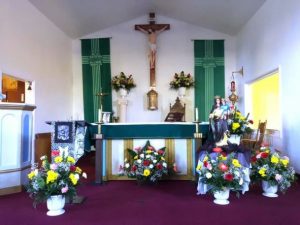 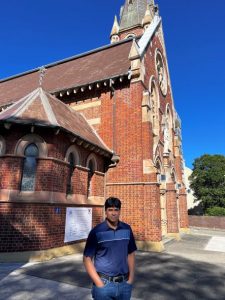 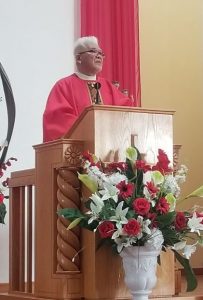 Parish community at the Night of Saint Mary